Yesterday, Ragleela performed an afternoon concert at the Salle de Diffusion Parc-Extension in Montreal. We didn't know what to expect from a concert at 4pm, but the hall was completely full to capacity (overflowing, in fact)! I suppose it helps that the concert was free. :)
As some of you may have seen in previous posts, the Ragleela ensemble is somewhat variable in instrumentation. For this concert, the group was made up of Uwe on sitar (and sansa), Jean-Marc on guitar (his custom 7-string, and gourd guitar), Cédric on contrabass, Guillaume on clarinet (and bass-clarinet), and myself on tabla (with my new tabla-percussion kit that includes two Tablatones and a couple of cymbals).
Aside from the opening tune, View of the Green Valley, all the pieces we played were from Ragleela's upcoming CD. This was also the concert premiere of Open Horizons and Sansala, both of which were composed mainly by Jean-Marc, making them oddities in our repertoire (most of Ragleela's music is principally composed by sitarist Uwe). Open Horizons is in drut Teentaal, and features some lovely melodies, and virtuosic solos exchanges between the sitar and the guitar. Sansala features some haunting melodies on bass clarinet, with the tabla and sansa providing a relentless groove in three. Unfortunately, I can't post any samples until the CD is released! 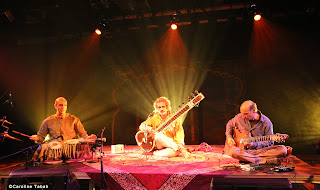 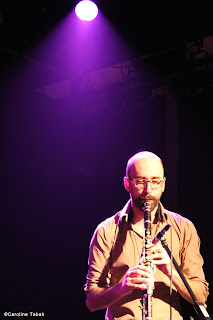 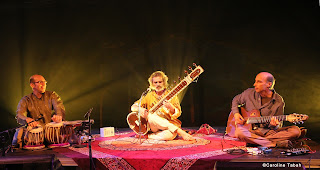 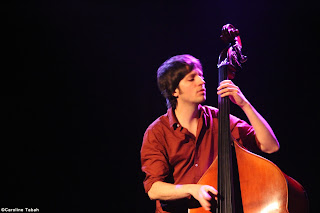 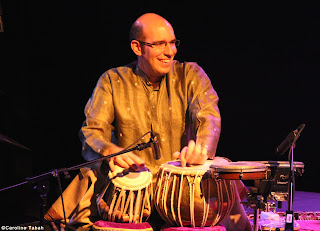 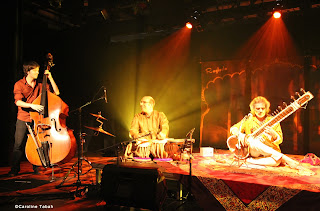 The next Ragleela concerts are set for July 21 in Sainte-Therese, and August 18 in Vercheres. The new album should be out this fall!
Please visit my Facebook page for even more photos!
Thank you to Caroline for capturing these musical moments.