My friend Marie Saintonge recently spent six months in India, studying the bansuri with Kiran Hegde, himself a student of legendary violinist N Rajam. Marie has since invited him to Canada, where he is currently spending two months performing and teaching. I am very happy to be accompanying him for all his Canadian concerts and workshops.
Kiran has a very sweet sound, and plays in a very vocal style, though is not shy to bring out the more 'instrumental' aspects of bansuri playing as well, from the slowest vilambit ektaal, to a blazing fast drut.
Our first concert took place at the Grande Bibliotheque in Montreal on May 11. 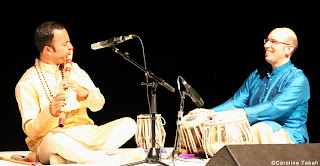 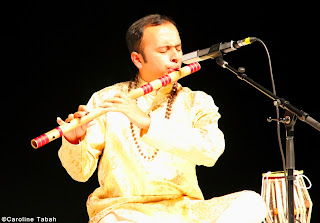 The next day, I accompanied Kiran for a hands-on raga workshop that he gave at Timpano Percussion. Quite a few musicians came, and we had singers, flutists, a saxophonist, and even a fretless electric guitarist! 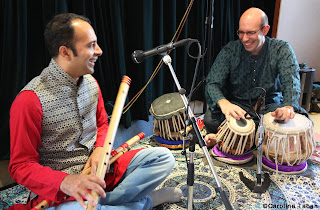 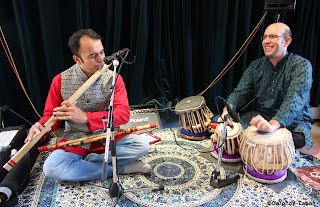 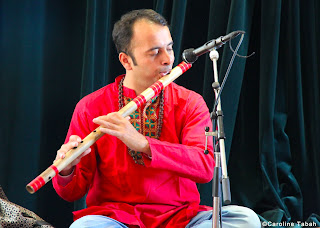 A couple of weeks later, we headed to Toronto, for a concert graciously hosted by Joanna de Souza and Ritesh Das from M-DO/Toronto Tabla Ensemble, at the lovely St-Stephens-in-the-Fields church. Here, we were joined by longtime collaborator, and Kiran's Guru-bhai, Jake Charkey, for a rare bansuri-cello jugalbandi. Jake and I have performed numerous times before in Montreal, before he headed out to Mumbai to study with N Rajam. He has been there for the last three years, and so it was great to be playing together again, and to hear the progress he has made in all this time. 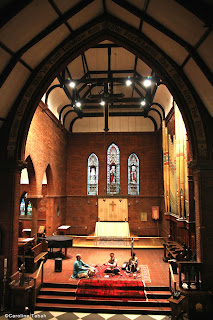 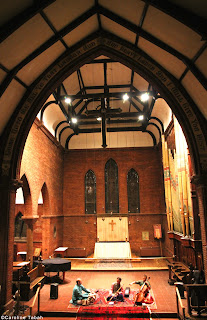 The next morning, we hit the road, and were back in Quebec for a concert at the beautiful Sivananda Ashram, in Val Morin. 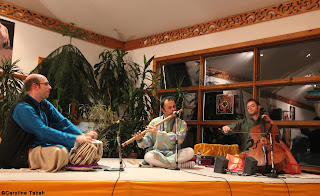 We also performed a house concert last week, but I unfortunately don't have any photos of that occasion. There is yet one more concert to take place on this tour, on June 26 at an art gallery in Ste-Hyacinthe. Please see my website for more details...
Thank you to Caroline Tabah for the photos!