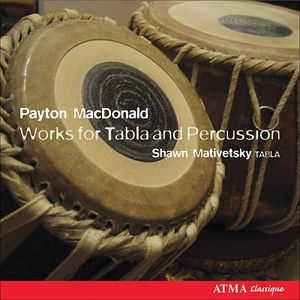 Works for Tabla is a recording that combines ancient drumming traditions with a contemporary composer’s perspective. The seeds for this project were planted many years ago in Idaho, when as a teenager, composer Payton MacDonald first heard recordings of classical Hindustani music performed on tabla drums in his local public library. Since that time, he has immersed himself in studying this music and developing an impressive career as a composer and performer.

MacDonald composed all of the works on this recording, which incorporate the improvisatory versatility and virtuosity characteristic of classical tabla music. His three concertos for Tabla and Percussion Quartet were composed between 2002 and 2004, and his solo Alap, Jor, Jhala was composed between 2003 and 2005. They are performed by Canadian Shawn Mativetsky, who met MacDonald when they were studying tabla with their guru Pandit Sharda Sahai. Together they are seeking to develop a new kind of classical music that will stand the test of time and engage many generations of listeners.