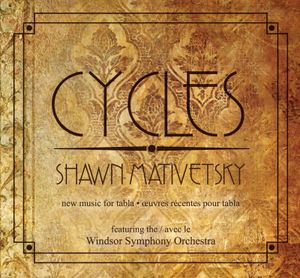 Over the past decade, Shawn Mativetsky – percussionist, composer and educator – has been working to combine his dual backgrounds in both Western and Indian classical music by commissioning new music for the tabla. The resulting works draw their inspiration from Western and Indian music in varying degrees, and reflect the personalities and approaches of the individual composers. The tabla, with its quasi-melodic sonorities, is a unique percussion instrument that produces a colourful palette of sounds, rhythms of extreme intricacy, and music of great depth and vibrancy. Cycles features new works for tabla from Canadian composers Paul Frehner, Jim Hiscott, Christien Ledroit, Nicole Lizée, and Bruno Paquet and features guest performances by the Windsor Symphony Orchestra, directed by Brian Current, as well as Marie-Hélène Breault on flute, Catherine Meunier on vibraphone, and Xenia Pestova on harmonium. 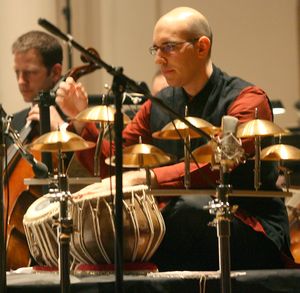 0:00/???
Elementalities is a set of short pieces, all based on different presentations and mutations of musical elements. Elemental I and Elemental II are mostly unmetred, giving a free-flowing feeling to the material. As its title would punnily suggest, Cereal is composed using serial techniques based on materials from the other movements; while the tabla part is entirely composed in the other movements, here the optional tabla part is improvised. In Floating, the rhapsodic flute line ‘floats’ above the underlying ostinatos, gradually increasing in density, played by the tabla and vibraphone.

Inspired by K.K. Downing and Glenn Tipton circa 1983, Metal Jacket explores the raw, gritty qualities of the tabla and harmonium. At points in the work, the roles of the two instruments are reversed as the harmonium produces percussive sonorities and the tabla provides the melodic content through use of the tuning hammer. The work showcases the lower register of the harmonium, exploit- ing its rich, resounding tone, and emphasizing its compulsory need to “breathe.” Like Downing and Tipton, the two sound sources at times intertwine to create detailed harmonic material and synchro- nized grooves. At other times, they trade off in a duel-like fashion.

Inspired by the famous Montreal ice storm of 1998, Les arbres célestes contrasts the warmth of individual life, the coldness of cosmic space, fantastic and celestial, created by the combination of live tabla and prerecorded tape, based on the composer’s personal experiences during the storm. In Shadow Play, composer Jim Hiscott took his inspiration from Balinese shadow puppet theatre and married it with the Benares tabla tradition. The flute and tabla chase after each other in playful fashion, with each in turn taking on the role of soloist and accompanist.

Though the art of tabla solo is highly developed in the Indian classical tradition, the tabla normally does not appear alone; it is accompanied by a melodic instrument. In Ke-Te, composer Paul Frehner sought to create an unaccompanied tabla solo. It is interesting to note that in contrast with a traditional tabla solo, which features much spontaneous improvisation, Ke-Te is principally composed, with only a couple of instances where ad lib is indicated.