This past October 5, I had the great pleasure to perform in Erreur de Type 27's production Musica Masala II, a concert of new music inspired by India. The concert took place at the Salle d'Youville, in Quebec City's beautiful Palais Montcalm, which is quite a prestigious hall, along the lines of Montreal's Place des Arts. 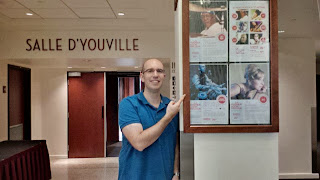 The concert program was made up of works by mostly Canadian composers, with varying levels of inspiration from Indian music and culture. We opened up with Payton MacDonald's Farmaishi, which is a sort of tabla concerto, accompanied by flute, clarinet, marimba, and contrabass. The tabla materials are traditional, based on a famous Benarsi farmaishi tukra, and also including Benarsi theka, and some famous Benarsi kaidas/bants. Next was the world premiere of Courants, for flute, clarinet, tabla, marimba, and contrabass; a new piece by Pierre-Olivier Roy, commissioned by E27 especially for this occasion. Here, the tabla writing is not at all traditionally-inspired. Still, the tabla (along with the bass) takes on the traditionally timekeeping role, grooving along through quickly changing metric structures. 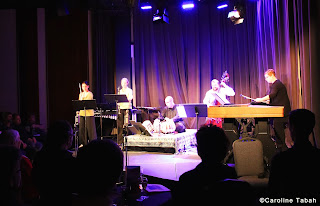 The next piece was a special arrangement of a traditional Carnatic piece, Mokshamu Galada, for cello, accompanied by myself on tabla, along with drones provided by bowed vibraphone and contrabass. I'm not really used to accompanying Carnatic music, so we took more of a North-South fusion approach to the materials, with Gabriel Dharmoo playing in traditional Carnatic fashion, and me playing in a more typical Hindustani accompaniment style, with the addition of tabla tihais at the ends of sections, as a mridangam player might do. 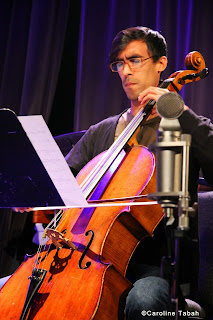 I then performed a solo tabla piece, Frictions, written for me by Quebec composer Patrick Saint-Denis. It is a particularly challenging piece to play, as it does not make use of any of the usual phrasings found in Indian classical tabla playing. The 'friction' is the use of the tabla in this very 'non-tablaistic' (or non-idiomatic) way. Though I find the piece to be extremely challenging, the piece got an excellent reaction from the audience.
We ended the first half with Christien Ledroit's Elementalities, for flute, vibraphone, and tabla. This is a piece that I have played numerous times since having commissioned it in 2000. It is truly an excellent piece; one that I believe is quite significant in the contemporary tabla repertoire. It is actually the opening piece on my latest CD, Cycles. 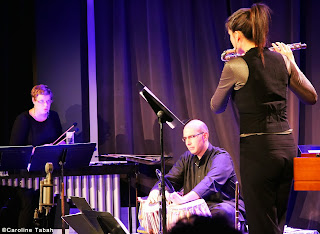 After the intermission, the concert continued with Gabriel Dharmoo's Ainthu Miniyeccars for flute, vibraphone, and tabla. This was only our second time playing the piece, the last time being its premiere during the first edition of Musica Masala back in 2011. This was followed by the only piece that I did not play on: an improvisation led by Gabriel Dharmoo, inspired by the nine rasas. The concert concluded with a new arrangement of Pandit Ravi Shankar's Aube Enchantée, which is normally performed on flute and harp (or guitar, or marimba). We came up with our own arrangement for flute, clarinet, marimba, contrabass, and tabla; a combination that works really, really well.
And what a great gang of musicians to collaborate with - Marie-Hélène Breault and Geneviève Savoie on flute, Marie-Julie Chagnon on clarinet, Etienne Lafrance on contrabass, Isabelle Tardif on marimba and vibraphone, and Gabriel Dharmoo on cello.
I was extremely happy to see that the hall was absolutely full. It's not easy to fill the hall for contemporary music concerts! The team at Erreur de Type 27 did a great job in spreading word of the concert, and Marie-Hélène Breault did an exceptional job in coming up with the concept and the programming. For those of you who missed the concert, we'll be presenting it again twice in Montreal, on December 10 and 13 at the Maisons de la culture Cote-des-Neiges and Plateau Mont-Royal!


In preparing for the concert, aside from numerous rehearsals in the month leading up to the concert, we were very fortunate to be in residence at the Salle d'Youville for a couple of days before the concert. During this time in Quebec, I was very happy to present a tabla masterclass at the Conservatoire, graciously hosted by percussion instructor Anne-Julie Caron and the conservatory's director Louis Dallaire. Quebec City is such a lovely city; not at all a bad way to spend a few days! 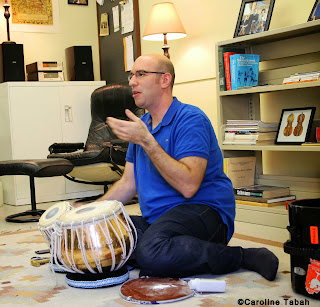 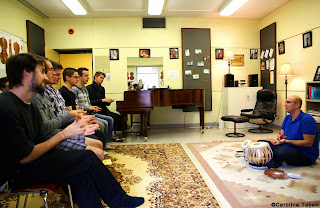 Thanks to Caroline for the photos! I have posted many more on my Facebook page.